When British TV producer Jim Grant found himself “let go” from his position due to corporate restructuring, he read some mystery/thriller novels.  One thing that started to bother him was that each hero in the novels he was reading had some sort of flaw.  Deciding to write a novel himself because “they are the purest form of entertainment,” he also decided he’d had about enough of these “miserable and depressed” protagonists, and he would write about a hero without any such flaws.

Creating the pen name “Lee Child” for himself and creating the hero named Jack Reacher, that author became a huge success.  The Reacher novels now number twenty titles, with the 21st due out this November.  There has been one movie grossing $200 million worldwide, and the second movie about Reacher is slated to be released this October.

I came across Jack Reacher while playing “Genre Bingo” several years ago.  Since then, I’ve read every one of the 20 titles, and also seen the movie.

Reacher the character is smart, and his moral compass is unshakeable.  Moreover, he is absolutely the toughest physically.  Essentially, there is no criminal situation he cannot solve. 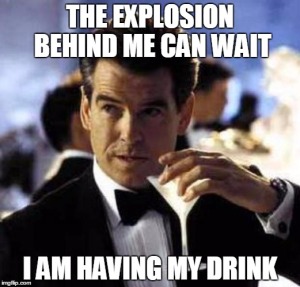 Lee Child was not the first to create such a character.  Going back to Siegel and Shuster in the 30s with their Superman character, moving to Doc Savage, and continuing with such characters as James Bond in the films and Lara Croft in video games, I’ve dubbed such heroes “omnicompetent” – in other words, they do all things well.

However, Jack Reacher may be the biggest omnicompetent hero thriving in fiction right now.

What are Reacher’s strengths and attributes?

Physical strength: 6’5”, 250 lbs. of  muscle; hand to hand fighting ability – fights with brutality and a mix of moves from various martial arts learned in childhood and Military Police training; marksman – Reacher is one of the top long distance rifle shots in the entire world, and is proficient with virtually all firearms; inborn internal clock – always knows what time it is; mathematical ability – able to perform calculations in his head and does mathematics for fun; fearlessness – reacts to situations that would induce fear in others with aggression; language arts – fluent in English and French, passable in Spanish; musical knowledge and memory – can recall entire musical pieces note by note with the ability of an inborn MP3 player, has obscure blues musicians lives and histories memorized (and this figures into plotlines); and finally, detective ability – due to his background in the Military Police, Reacher has thorough knowledge of procedure and understands how to investigate mysteries.

After meeting this prodigy in print, it was disconcerting to many to have Tom Cruise play Reacher in the movies.  Lee Child, however, was fine with it, claiming that Cruise captured the essential element of the Jack Reacher character – he is a force of nature and unstoppable.

If any of this sounds appealing, please investigate the world of Jack Reacher (books, CD audiobooks, eAudio, eBooks, and movie), at Fontana Regional Library.