Skip to content
HomeWatch it now: Embrace of the Serpent

Recently, a friend heartily recommended that I watch a film called Embrace of the Serpent after discussing one of my favorites, Aguirre the Wrath of God, written, directed, and produced by Werner Herzog. Both of the titles mentioned above present a strikingly similar plot in the same geographic location: the Amazonian jungle. Aguirre and Embrace follow the all-too-familiar conquest and exploitation trajectory of indigenous peoples and their pristine, resource-rich, and sacred environment.

In Aguirre, the goal of the conquistadors is the city of El Dorado; in Embrace, the goal of the barons is rubber. In Embrace, directed by Colombian filmmaker Ciro Guerra, the only signs of the brutal rubber plantations are villages burned to the ground, only a few remaining indigenous groups (mostly the ones who do not resist the rubber barons), a strong distrustful and traumatic relationship between the natives and the whites, and scarred trees dripping out white, violent rubber. In one of the most gut-wrenching and gruesome scenes of the film shows the protagonist and hero of the story, Karamakate known by all tribes as “The World Mover,” along with another native named Manduca and the German botanist Theo Von Martius walk up on a rubber extraction area. The trees all have the telling marks of rubber extraction with buckets beneath them to catch the unrefined liquid. Manduca, full of rage and heartbreak from watching the bloody rampage in the Amazon over the past few years, runs screaming and cursing and thrashing through each bucket of unrefined rubber. Hearing the commotion, a native man runs up to the site. His is missing a foot and a leg from amputation and torture from the plantation owners. His eye has recently been gouged. He frantically hops about on his amputated limbs picking up buckets and desperately tries to scoop up the rubber that has been poured onto the leafy forest floor. The man then kneels in front of Manduca (the travel aide and companion of Theo Von Martius) and begs him to shoot him. He pulls the barrel of the gun right up to his forehead. Manduca, with resolve, says he will shoot the man to save him from more torture from the rubber barons. Manduca fires, only to see that the gun was not properly loaded or misfired. They leave the man still kneeling, pleading for his death.

The film switches back and forth from past to present. Karamakate is in both space-times.Karamakate is young when a gravely ill Theo Von Martius and Manduca land their canoe on his isolated patch of land. Karamakate lives in complete isolation–his tribe and village were wiped out because they fought the rubber barons. He is distrusting of all white men, for in his experience, they only bring guns, violence, and death. Karamakate is a healer. Known throughout the Amazonian villages as “The World Mover,” his powers are not a secret–even to botanist Theo Von Martius. The German scholar concerns himself with gathering and recording plants, recipes, stories, myths, art, and other dwindling cultural institutions unique to the indigenous peoples of the Amazon.

When Manduca first introduces Theo Von Martius to Karamakate, Karamakate staunchly denies any part in helping the sick white man. Then, Karamakate explodes in anger, lunging at the sick German’s neck, which is adorned with a necklace particular to Karamakate’s clan. Karamakate screams “Where did you get this?” Theo Von Martius answers that he got it from a tribe that is now existing up the river. Karamakate promises the man that he will help him find the sacred plant “yakruna” if he takes him to his villagers. The three men, Manduca, Karamakate, and Theo Von Martius set out on the river to find Karamakate’s people. Throughout their travel, they come upon a Spanish mission for children, villages full of people welcoming a familiar Von Martius, and villages smoldering, bloody, leveled. Von Martius, somewhere along the journey, becomes a subject that needs protecting by only Karamakate. Karamakate administers healing but temporary substances to the ailing Von Martius. 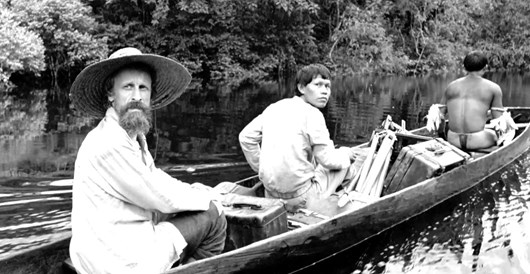 The film then switches to an older Karamakate painting glyphs on the side of a rock. He is thigh deep in the river when a snake comes swimming past him. He senses something just like his younger self did in the beginning of the film as Manduca and Martius eddy out and approach him. This time, many years later, the white man is alone. He claims that he, too, is looking for the sacred yakruna plant. He explains to Karamakate that his illness is that he cannot, nor has ever, dreamed. The old Karamakate realizes that, in his interactions with this scientist from the United States, that in his old age and years of isolation, he has forgotten many of the recipes and traditions of his life. The American figure obviously has been taught how to make medicinal substances out of coca leaves and many other plants of the Amazon. Karamakate sees the American scientist, Evan, as a dream coming to fruition. The dream he refers to is his journey decades earlier with Von Martius. The old Karamakate has forgotten many things. He tells Evan that it is Evan who will lead the way to the yakruna plant, not the other way around. Evan is dumbfounded. They embark on their quest. They come across the same Spanish mission from Karamakate’s earlier journey. He and Evan get out of their boat and approach the mission to find an Apocalypse Now scene: a Brazilian man has assumed the figure of Jesus on the cross. His followers, now grown, were once the young children that young Karamakate, Von Martius, and Manduca encounter during the first journey of the film. The scene is delirious, unsettling, and full of Catholic imagery. There are signs throughout the mission that praises the priests who kidnapped the Amazonian children from their parents and villages. The signage claims that the priests brought God to savage cannibals. The scene escalates into a moment driven even further by a psychosis ailing the men who were taken as boys from their villages. Young Karamakate snuck away to teach the children the mythology of their culture–the tinctures and medicines and origins and uses for it all. But what he taught them was not enough. Their lack of mythology led them down a path of complete discord. Now, the children saved from savagery and cannibalism, are worshipping a figure whose flesh is consumed for communion. The effects of Catholic missions, money hungry rubber barons, conquistadors, etc., are felt strongly in this cathartic scene that see Karamakate and Evan escape the village while they mill around in complete hysteria after drinking a hallucinogenic substance mixed by Karamakate. Narrowly escaping the debauchery, Evan and Karamakate continue their journey down the river. To find out what happens, you must watch this gem!

This description has no spoilers, for the meaning of this film is in every quiet moment, every pan-out, every crackle of a fire, bend in the river. The story is about cultural syncretism. It’s about protecting knowledge, but also not hindering anyone from it. It’s about remembering the actions of our ancestors–conquered or conquerors. It’s about defending what’s sacred, but destroying it when it’s threatened. It’s about the cycle of life and death–not fearing death and not taking each breath for granted.

Watch this beautiful film. The cast is just as diverse as the plants in the Amazon. The story as timeless as the Milky Way (part of the myth of the Great Serpent). The connection between humans as ancient as our first guttural grunts in communication.

I will leave you with director Ciro Guerra’s explanation of the origin of this title from an interview with Cineaste:

Cineaste: Does your film’s title refer to “the serpent” as a metaphor for time or of the Amazon? And why an “embrace”?

Ciro Guerra: In Amazonian mythology, extraterrestrial beings descended from the Milky Way, journeying to the earth on a gigantic anaconda snake. They landed in the ocean and traveled into the Amazon, stopping at communities where people existed, leaving these pilots behind who would explain to each community the rules of how to live on earth: how to harvest, fish, and hunt. Then they regrouped and went back to the Milky Way, leaving behind the anaconda, which became the river. The wrinkled skin of the serpent became the waterfalls.

They also left behind a few presents, including coca, the sacred plant; tobacco, which is also another kind of sacred plant; and yagé, the equivalent of ayahuasca, which is what you use to communicate with them in case you have a question or a doubt about how to exist in the world. When you use yagé, the serpent descends again from the Milky Way and embraces you. That embrace takes you to faraway places; to the beginning where life doesn’t even exist; to a place where you can see the world in a different way. I hope that’s what the film means to the audience.