Kristina Moe here at the Macon County Public Library in Franklin, writing my first blog. Yes, I’ve been here nearly 12 years without contributing, but last month I was finally convinced to write something. Here goes.

Most days I love my view from the Reference Desk- when I started writing this there was a glorious red maple showing off just outside our window; now students from next door are asking for help as they start research papers, and the general everyday juggling of computer/internet/printer/catalog issues is fun and manageable with the help, humor and grace of my coworkers.

But, occasionally, a little kick start is called for and my job gives me the opportunity to step away from the desk and take a look at the bigger picture surrounding me and our community…

I had the privilege of taking a drive (for work!!!) through the Fall foliage North on 28 to the Nantahala Outdoor Center on the last Monday in October. I joined around 80 other people gathered next to the river to be a part of the unveiling of the first National Trail of Tears Historic Trail signs to be placed in North Carolina. They’re being posted at the intersection of the Trail of Tears and the Appalachian Trail, where the two cross paths on NOC grounds. 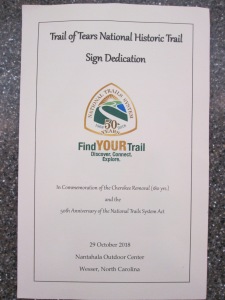 Attendees and speakers included bicyclists who’ve participated in the 900 mile “Ride to Remember”, several of our friends from the Nantahala Hiking Club, Leanna Joyner- author of “Hiking through History: Civil War Sites on the Appalachian Trail”, and Cherokee Chief Richard Sneed. Before the event started, NHC member Mary Stone introduced me to several people including Sue Abram, WCU professor & NC Trail of Tears Association President, who I am talking with about bringing programs to the library.

Sue gave the opening comments and introduced each presenter, beginning with Matthew Tooni, who offered a prayer in the Cherokee language. He is a student at the New Kituwah Academy which is a Cherokee language immersion school for children and adults. 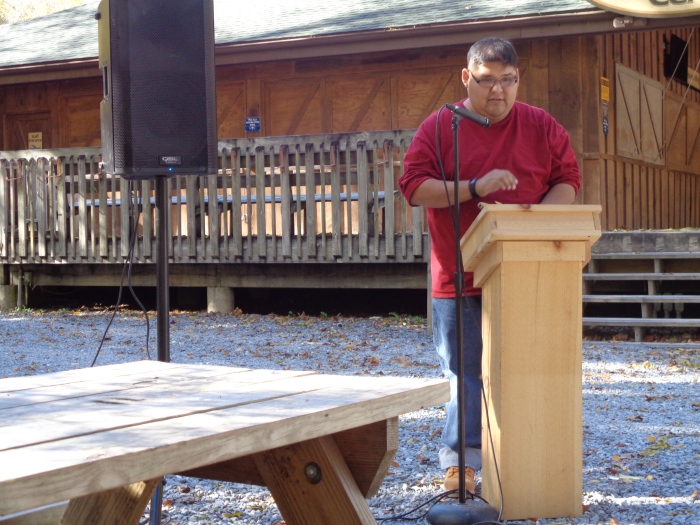 Aaron Mahr is the Trail of Tears National Historic Trail Superintendent; he traveled here from his home in Santa Fe, New Mexico. He spoke about the validity that signage gives those who travel to visit historic places. We might not all pay attention to commemorative signs especially if we don’t have a personal connection, but think of people who had relatives who were sent on the Trail of Tears, and the acknowledgment that these signs will give to what was done to their family members. The signs give the mileage between the beginning of the Trail – a few miles from our location- to its conclusion nearly 900 miles away in Oklahoma.

Leanna Joyner, author and Program Director for Volunteer Relations at the Appalachian Trail Conservancy gave us pause as she asked us to listen and hear the “not always pretty story of our history”.

Because I wondered why there haven’t been signs posted until now, I asked Leanna to tell me more about how this came about now:

“The concept originated at the Partnership for the National Trails System conference in Franklin, Tenn. in 2015. The organization supports the network of land managers and private organizations working collaboratively to sustain the National Trails network across the United States. Recognizing then that we were headed toward the 50th Anniversary of the National Trails System Act of 1968 and that a great way to elevate the profile of all Trails is to elevate awareness of their intersections, Anita Finger-Smith of the N.C. Chapter Trail of Tears Association and I talked about some sort of event or other activity (in this case the sign designation) for 2018.

It really was just a concept until Anita and Sue Abrams started to spearhead the discussion earlier this year that brought about this significant milestone in elevating the profile of the Trail of Tears here in North Carolina.”

I feel privileged to have attended this event- to represent the library and observe history being preserved and made.

We’re working with the North Carolina Trail of Tears Association to bring programming, displays and new books to the collection in order to continue telling the Cherokee story at our libraries, particularly during MCPL’s Walking with Spring series which happens in late March and April.

Meanwhile, here are links to just a handful of the books and films available to borrow from our library system or stream for free through Kanopy and your library card:

Trail of Tears: the Rise and Fall of the Cherokee Nation

Hiking through History: Civil War Sites on the Appalachian Trail

NOC Stories: Changing Lives at the Nantahala Outdoor Center Since 1972

First Language: the Race to Save Cherokee

The Trail of Tears: Cherokee Legacy

The Trail of Tears: Cherokee Legacy

The Cherokee Word for Water