December. Short days, long chilly nights. As we drive to work in the dark, and drive home in the dark, we begin to wonder, will we ever see the sun again?

If we feel this way in these modern, enlightened times, imagine how it must have felt millenia ago, when the sun seemed to struggle more and more to rise, and faltered more quickly towards the horizon, with each passing day. Imagine especially how it must have felt for those living in far northern latitudes, when the sun might disappear entirely! Is it any wonder, then, that rituals associated with the winter solstice (December 21 this year) have been observed since ancient times? 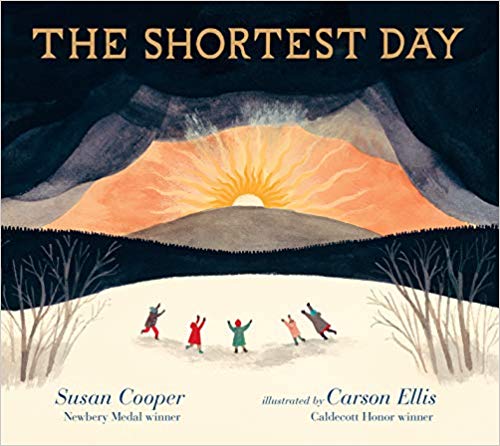 Back in 1974, eminent author Susan Cooper was asked to write a poem about the winter solstice for the now-famous Cambridge Christmas Revels, and her poem has been a part of the annual Revels ever since. This fall her poem was released in the form of a picture book, The Shortest Day, an evocative look at midwinter.

Thus begins the poem, and the book. Caldecott-winning illustrator Carson Ellis depicts Sun as a giant stone man-figure, bent with age, stooping lower each day, until he can barely hold his head up above the horizon, and indeed he seems to collapse on that shortest day.  In the illustrations you can almost feel the weight of the dark that the sun is trying to push away. Just look at the way the curtain of dark is looming over the small people in the cover illustration (farther above). 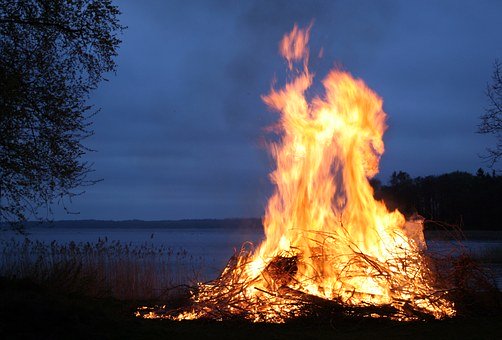 It must have been terrifying indeed to wonder if the sun would ever rise again. Wouldn’t you do everything in your power to give the sun a chance for survival? And if it seemed to work once, you’d be sure to do it every year. No small wonder that there are winter solstice traditions in so many cultures. 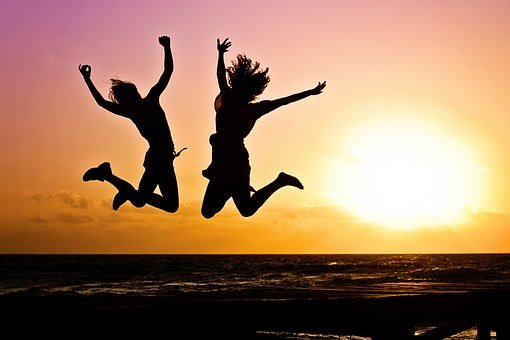 . . . And when the new year’s sunshine blazed awake they shouted, revelling . . .

What a joyous moment when the sun reappears! It’s easy to imagine thinking that the sun really has been reborn after that dreadful longest night of the year. And it’s no wonder that cultures have been celebrating this important moment for so long, from Sol Invictus dating back to 3rd century Rome, to Yule in early Iceland, Yalda Night in ancient Persia, and possibly even the placement of Christmas near the winter solstice (December 25 by the old Julian calendar, December 20 or 21 by our current Gregorian calendar).

Many novelists have taken advantage of the rich possibilities of winter solstice in plotting intriguing stories. Mystery-lovers can take special delight in a number of solstice-set tales. Ngaio Marsh’s Death of a Fool (aka Off With His Head) makes use of an ancient sword dance at a 20th-century solstice festival, with murderous results.  The Shortest Day: Murder at the Revels by Jane Langton offers up multiple murders behind the scenes of Cambridge’s famous Christmas Revels. Peter Tremayne’s The Haunted Abbot goes back in time to 7th-century England, and murder at a solstice festival of that time, investigated by a visiting Irish nun. And in Arkansas, Joan Hess’s A Holly, Jolly Murder puts a New Age spin on winter solstice celebrations — though they aren’t usually accompanied by murder!

And no small wonder that Susan Cooper, author of the new The Shortest Day that inspired this blog, set her famous fantasy The Dark is Rising in the days around winter solstice, when the dark has its strongest power, and the power of good, of light, is at its most feeble. I’ve written about this book before, as it’s one of my very favorites. If you haven’t read it, now is the perfect time. 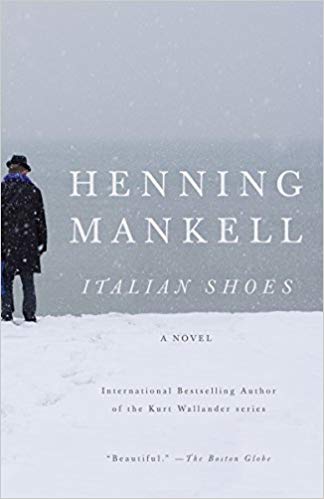 In the literary fiction genre is Henning Mankell’s Italian Shoes. The author of the Inspector Wallender mysteries takes a very different path here. Set on an isolated island off the coast of Sweden, the main character is frozen emotionally in an icy midwinter world. His path towards thawing is a difficult one, but well worth the effort. (The sequel, After the Fire, is Mankell’s final work.) 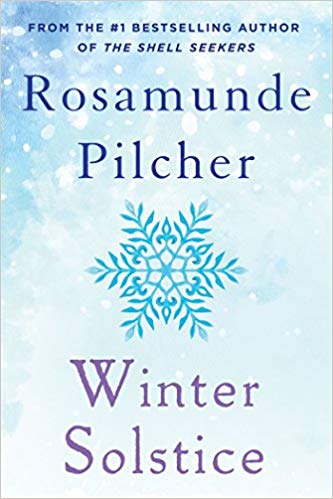 Elin Hilderbrand’s Winter Solstice is a far gentler tale, and really is using the solstice term more for convenience than for its pagan connections. But it’s still set in the time of solstice and is a cozy, warm-hearted read for this time of year. You may want to read the other books in this Winter series first, and get to know the good folks of Nantucket. Rosamunde Pilcher’s Winter Solstice is also a brighter tale, focused more on the return of the light than on the dark side of the winter solstice. Charming, gentle, it’s a warm story of rediscovered hope in new possibilities after a time of darkness and sadness.

We are fortunate to experience this ebb and flow of the sun; a friend who spent several years living on the equator told me one of the hardest things about it was the sameness of the 12-hour days and 12-hour nights, always the same year round. We might ache for more sunlight in these dark days of winter, but we also get wonderful long days of summer as compensation. As I curl up for my annual re-reading of The Dark is Rising, I know that summer will come again.